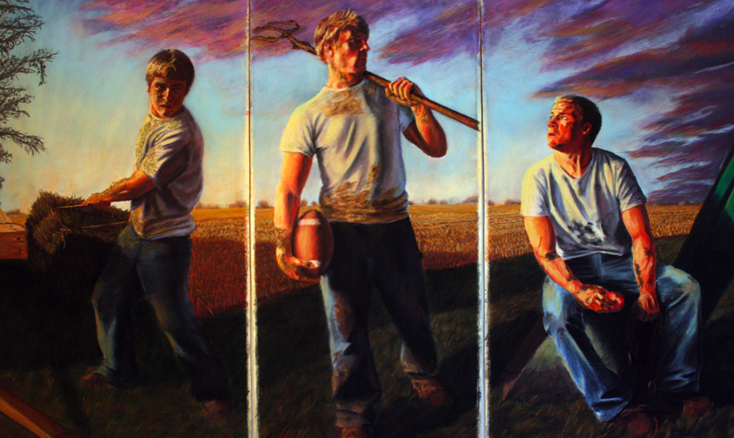 Farmboys is a chalk pastel drawing on Arches watercolor paper.  The idea for the drawing was something I had always had in mind but did not have the money or time to work on during college.  My senior year at Iowa State University I applied for a FOCUS Grant and my proposal was accepted for this drawing.  From there it took me about a year to fully complete outside of full-time classes, full-time work, and helping on the farm.

The drive and purpose behind this piece was to communicate issues and decisions that children of farmers are facing today.  Today the family farm is dying and most children of farmers are going into jobs other than agriculture.  They face difficult decisions about what to do with their future and how to handle their past.  The drawing shows the dynamic between siblings on their choices.

The figures’ poses are all based on famous sculptures.  Each one was chosen for a specific reason and for the overall design.  First, the composition of the three boys forms a triangle, which is a classic design technique from the Renaissance.  The triangle communicates a sense of stability and unity.  This directly relates to the brothers who rely on each other at all times. Second, the three sculptures are in different actions.  One is in reflection, one is in a stance of readiness, and the other is in action. I feel these are the phases a person goes through when facing a decision.  Lastly, I chose sculptures rather than figures in paintings because sculptures’ composition must work from every angle.  Therefore I could use any angle I wanted and the figure would still work on a 2 dimensional surface.  I was fortunate enough to see all three sculptures when I study and lived in Rome; the Rome Program is part of the Iowa State Design College, which has a campus in Rome.

The figure to the left is my youngest brother Andrew based directly from Bernini’s David in Rome. This sculpture depicts David in the action of slinging a rock from the biblical story of David and Goliath.  In this drawing the boy is throwing a hay bale.  Farm children are always working and have many responsibilities.  They need to always be balanced with the weight that they carry.  Andrew is constantly balancing the responsibilities that he was born into.

The figure to the right is my middle brother Matthew.  His pose is taken directly from the Ancient Greek sculpture The Boxer, which is also in Rome.  The Boxer is a man sitting after a boxing match with gashes on his face and arms; he is exhausted yet looking upward as if there is some hope.  In the drawing Matthew is holding an apple and a chain that falls down to the ground.  The apple represents education and the chain represents the linkage to the farm.  Children of farmers have to decide if they will pursue education that will most likely take them away from the farm or do they stay home and work on the farm.  Some may see the chain as restraining but for me it represents the forever linkage and love for the farm.  It is a decision all farm kids must balance and it can be difficult to decide.

The center figure is myself in the pose of Michelangelo’s David which is in Florence.  This center point has a lot of meaning in it.  This figure holds a football and the pitchfork, which represent play and work respectively.  Farm kids have to always balance those responsibilities.  The David was created in Florence in response to the power of Rome during the Renaissance.  Florence did not like that Rome wanted to exert their power over them.  The David was place outside of city hall with his face looking south towards Rome.  Just as the sculpture shows David in a stance of readiness for Goliath it also represented Florence’s readiness for giant Rome.  The small vs. the over powering.  All odds are against David and Florence and no one would think them a victor in the end.  I took this concept into my drawing.

​The figure is looking at a storm that is approaching.  Farming is always a battle with nature.  It is a love/hate relationship and nature is so large that a farmer cannot change it.  This storm represents change: the change of growing up, change of the times, and the change of the family farms dying.  It is an empowering force that cannot be changed and we must face.  For me, personally, it also represents urban sprawl.  Both of the farms my family owns are planned to have a highway built through them and be developed.  As brothers, we know once the farm is in our hands we will have to make very difficult decisions.  Love vs. Money.  It tears farming families apart.  So this central figure looks toward this giant storm to confront it, to challenge it, to fight it.  A process of reflecting, being ready, and taking action as the poses suggest.  The younger brothers look at the oldest for guidance on not just their own balancing acts but for their future.  They rely on each other because the family and the farm are so important and prominent in how their lives where shaped.  They are farmboys.

There are also little things within the drawing that I tend to keep to myself.  One I will share is that there is an electric pole or cross in each drawing.  This represents our faith and the Trinity.  It is also my signature.  Another is a name within the tree.  These are just little things to keep people looking.